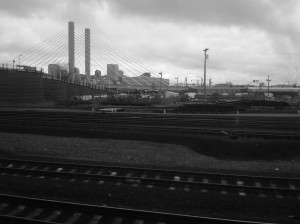 The Last Pale Light in the West.

I looked out from the window.  Watched the passing shacks, sheds, shanties, and week-end torture cabins that dot our great Northwest.  Haunted houses.  Suicide barns.  Junked cars.  Algae-filled kiddie pools.  Crumbling brick buildings.  Rotting timber.  Rusting machinery.  Rusting everything.  Everything rusting and getting overgrown.  Moss.  Mold,  Weeds.  Plants.  You can see the earth trying to digest all this man-made ugliness.  Trying to return all this shit back into molecules it can use.

Lori and I were on our way to Seattle.  We love the Pacific Northwest.  Gloom is good for our complexions.  We flew into Portland, hung out for a few days, then took the train up to see her brother in Wallingford.  I like train travel.  Always preferred it.  Very relaxing.  I like staring at the landscape.  I like it when it’s beautiful.  But I also get a kick out of seeing ugly places.  Always have.  Ever since I was a little kid.  My favorite family vacations were the ones to Tijuana.  After that Las Vegas, which is a different kind of ugly.

Anyway, the best way to enjoy any kind of bleak landscape is from a train speeding away from it.  Barstow.  Gallup.  National City.  29 Palms.  Folsom Prison.  There it is.  And there it goes.  Perfect.  Now make your way to the bar car.  And really make it go away. 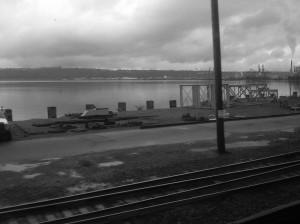 Speaking of bar cars.  While we were sitting at the station in Portland, these five business guys clad in Casual Friday climb into our car.  They’re all together.  Going to somewhere to do something.  Where or what I couldn’t give a rat’s ass.  Guys like this are so un-intersting ta me they usually turn invisible after my first glance.

They overhead their little rolly suitcases, sit down, plug in their lap tops, and evaporate into thin air.  Poof.  Gone.

Actually, only three of them.  They were on their way to the bar car before the train was even moving.  The first man up was a porcine chap with a burr haircut and a red face.  Of course him.  Retaining a little water he was.  You don’t just get bloated eyelids…you earn them.  He was the first to hop up.  He also made it easier for the other two to follow.  The Ice Breaker.  Taking point.  God bless you, soldier.

“Hey get me one,” the guy sitting right behind me calls out.  In a pointed way.  Like he knows the score.

Buzz-haired fat guy stops.  He gets the dig.  Decides to take it head on.  Turns to the guy and asks him what he wants.

He turns back and opens the sliding door.  The three file out into the next car.  Well played.

“Do you have a lot of work to do?” the guy behind me asks the guy sitting next to him.  I figure it’s to feel him out.  Like maybe unwinding with a cold one in the lounge wouldn’t be the worst idea a man had ever had.

Shit, I’m thinking.  He’s blocked in.  Can’t climb over this one to do a little early afternoon drinking.  That’s giving away a lot of leverage in the office power struggle.  Might pull that ace out of his sleeve someday.  Especially now that there’s been talk of downsizing.

Fuck it, dude.  Climb over the corpse.  Leave him to his lap top, while you suck suds and watch hobo jungles roll by.  You hate this job anyway.  Just get drunk in the bar car and hop off at the next stop.  Where ever it is.  Wander around.  Looking for adventure.  And love.

He could max out his cards.  Hock the company computer.  Shack up with some cocktail waitress that only has her kid two days a week.  Get into a fist fight with her ex in the parking lot of a KFC.  Spend the night in jail with him.  Listen to how that woman ruined his life.  Feel guilty he ever made it with her.  Get to experience the awkward handshake when she bails you out and not him.

But it was not to be.  He remained seated.  Starts clacking away at his keyboard.

Not one of my people.  Not like the Ice Breaker.  I bet he’d hop off.  Given the right barometric pressure.  He’d make that run for freedom.

I put on the Bose headphonic system and cued up Ben Nichols on the I-podular.  It helps to listen to good music while appreciating the passing scenery.  It really does.  I take better pictures too.  Sets my imagination free. 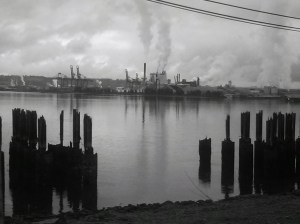 I watched a dilapidated Victorian house pass by.  A child molester’s ghost lives in the attic.  There was an abandoned mill that used to grind human lives into meaningless gristle.  A trailer where the wife beats the husband.  A tree fort with moldy Playboys.  A once magical place.  Where hope was born.

A decrepit men’s hotel.  Where it died.  In a hot plate fire.

A tin shack.  Bad things happened there.  More then once.

Sad gas station.  Spray-painted boulder.  A pile of tires.  A toxic pond.  A man with a big head standing by the road.  Holding a small stick.

A rusting swing set.   Last swung in 1991.  By a guy who did a lot of meth in Tacoma.  Robbed pizza guys before he got sent up to Walla Walla.  Now doing a fifteen-year bit.  Still remembers the swing.  It was his happiest time.  He knew it would be.  Even back then.  And he was right.  Now he dreams of dying. 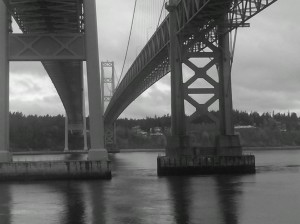 A choice of bridges to jump from.

We hit a patch of beautiful scenery.  I watched but couldn’t add anything to it.  It spoke for itself.  After a while I took off the headphones.

Lori was under the influence of Sudoku.  Forget trying to talk to her.  I decided to listen to the two guys behind me.  The conscientious employees.

I had to piece things together, but I got that they were all from some company.  One that sells supermarket check-out systems.  Pretty exciting.  Every kid’s dream.  Anyway, their main competitor is NCR, who according to the guy behind me, has been aggressively underbidding them.  They’ve also been offering a very generous service agreement.  One their company can’t match.  NCR is also better at innovation than the company these guys work for.

Why those dirty fucks.  Sounds like you’re on a sinking ship.  Better hit the bar car.

Thank God they still have the Safeway supermarkets contract.  Problem is Safeway doesn’t  keep up a lot of their stores.  They spend a lot on their check-out systems, but don’t spend enough on remodeling.  Some of the fixtures are over thirty years old.  It drives him crazy.

“My wife’s parents tell me they love to shop at Safeway…because there’s nobody there.  Oh God, I think, don’t tell me that!”

The other guy just grunts.  He’s the one who always has work.  Probably doesn’t appreciate all this defeatist talk.  Especially when there’s so much work to do.

The whole thing was depressing beyond anything I could cook up watching rural-industrial blight.

Pretty sweet deal alright.  I had hit the bummer bonus.

These were some unhappy warriors.  Lot’s of sacrifice and no glory.  Or whatever glory there is in paying the daughter’s orthodontist bill on time.  Doing the right thing, as best they can, and still pretty miserable.  Charging the bill.  Charging the hill.  Even when they know it’s going to murder them.  Pretty heroic, actually.  Heroes.  Everyday ones.  Like me.

Because it was pretty heroic of me not to get up and head to the bar car.  And try to drink their misery away.  For them.

The most brutal part was when they all had to get off the train at Tukwila, just before we hit Seattle.  The town was a quarter mile away from the platform.  It didn’t look like much of a town either.  I nudged Lori.  We watched them pull their little suitcases along a path so overgrown with summer weeds, it looked like they where making their way through a rice paddy in the Ia Drang Valley.  The Ice Breaker pulling up the rear.  His suitcase wobbling wildly.

Our train started to pull away.

“Just let them make it to the treeline, God.  Before the Cong get them.” 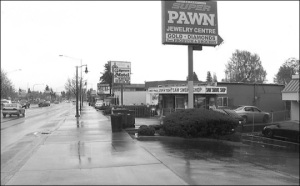 Tukwila, the end of the rainbow.

Marius is a recovering maniac. He has given up all his former hobbies in the interest of public safety. He now enjoys sitting in a chair with his arms folded while waiting for everything to end. His sun sign is Cancer, and his favorite color is purple. He is considered a good friend of the Mexican people.